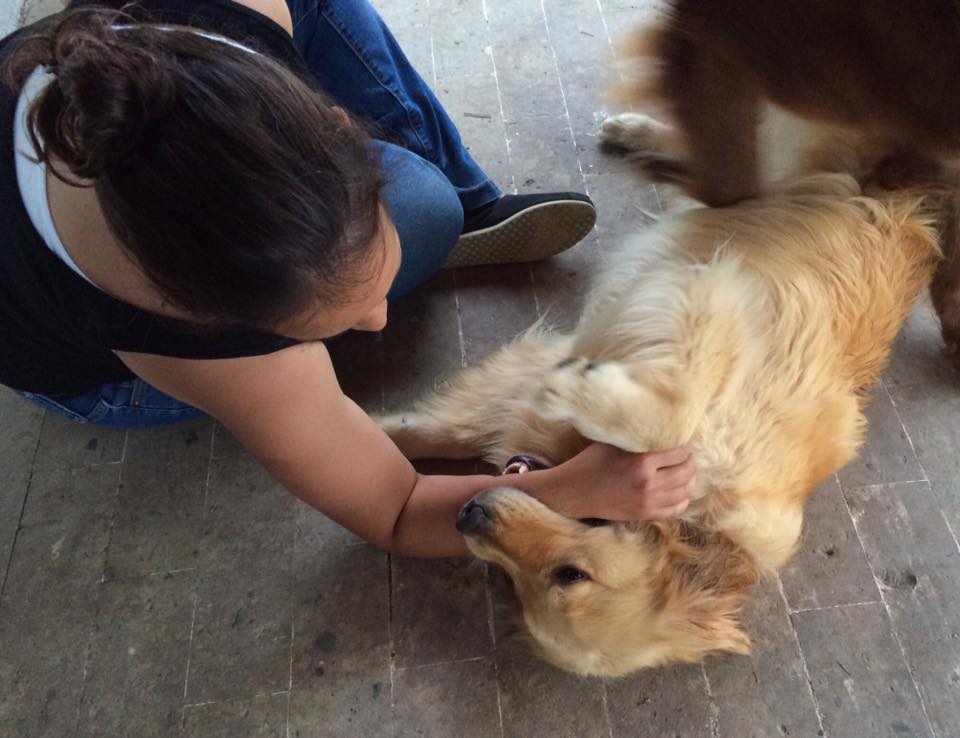 The muzzle grasp is an interesting behavior that I’ve seen in several canids, including our domestic dogs. It’s a behavior that scares many dog owners who believe it signals unconditional and uninhibited aggression. It doesn’t. The muzzle grasp is yet one of those fascinating behaviors, which developed and evolved because it conferred a higher fitness to those who practiced it.

The function of this behavior is to confirm a relationship rather than to settle a dispute. The more self-confident dog will muzzle grasp a more insecure one and thus assert its social position. The more insecure individual does not resist the muzzle grasp. On the contrary, it is often the more insecure that invites its opponent to muzzle-grasp it. Even though we sometimes see this behavior at the end of a dispute, wolves and dogs only use it toward individuals they know well (teammates) almost as a way of saying, “You’re still a cub (pup).” The dispute itself does not tend to be serious, just a low-key challenge, usually over access to a particular resource. Youngsters, cubs, and pups sometimes solicit adults to muzzle-grasp them. This behavior appears to be reassuring for them, a means of saying, “I’m still your cub (pup).”

When used to settle a dispute, a muzzle grasp looks more violent and ends in most cases with the muzzle-grasped individual showing what we ethologists call passive-submissive behavior, i.e. lying on its back.

The muzzle grasp behavior emerges early on. Canine mothers muzzle grasp their puppies (sometimes accompanied by a growl) to deter them from suckling during weaning. At first, her behavior frightens them and they may whimper excessively, even if the mother has not harmed them at all. Later on, when grasped by the muzzle, the puppy lies down right away with its belly up. Previously, it was assumed that the mother needed to pin the puppy to the ground, but this is not the case as most puppies lie down voluntarily. Cubs and pups also muzzle grasp one another during play, typically between six and nine weeks of age. A muzzle grasp does not involve biting, just grasping. This behavior helps develop a relationship of trust between both parties: “We don’t hurt one another.”

Domestic dogs sometimes approach their owners puffing to them gently with their noses. By grasping them gently around the muzzle, we reaffirm our acceptance of them. We show self-control and that they can trust us. After being muzzle grasped for a while, the dogs will usually show a nose lick, maybe yawn and then walk calmly away. It’s like they are saying, “I’m still your puppy” and the owners replying, “I know and I’ll take good care of you.” Yawn back and all is good.

Sometimes, the dog may even grasp our hand or our arm ever so lightly with its mouth. That is not mouthing or biting at all. It’s a derivative of the nose puffing behavior, and it has the same function. We see a similar behavior between related adult dogs and pups and dogs that know one another very well. It is an invitation to interaction, bonding, and maybe a muzzle grasp. Again, pull your hand or arm gently away from the dog’s mouth, muzzle-grasp it for a little while, make a few chomping sounds and yawn. Speaking dog language helps promote an understanding between our dogs and us. It may make us look silly, but who cares? I don’t—do you?

The behavior of grasping our hands is under control of what Lorenz called bite inhibition.* Bite inhibition is the behavior displayed by a dog (and also other carnivores like the cat) when it restrains itself from biting an opponent, although it would be easy for it to do so. In such a situation, most dogs will limit themselves to grasping the opponent without causing damage.

Biting and mouthing are quite different. They are more forceful and challenging than the grasping of our hand as an invitation to a moment of affection, and we should not reinforce these behaviors at all.

In conclusion: dogs don’t have hands, and so they use their mouths to perform some functions for which primates use their hands. Hands can be aggressive and forceful, as well as gentle and affectionate, and so can canine mouths. We must not be blind to the subtleties of behavior. Life is not black-and-white—it carries many shades of gray and color as well.

Mouthing and biting are not even remotely related to the muzzle grasp behavior. This photo shows clearly puppy play behavior, and yet it is biting. We should teach the puppy right away that this is not acceptable behavior (photo by unknown).

This behavior is not biting. It is a derivative of the muzzle grasp behavior and it functions as pacifying behavior. Photo: Ana Laura Chavez.