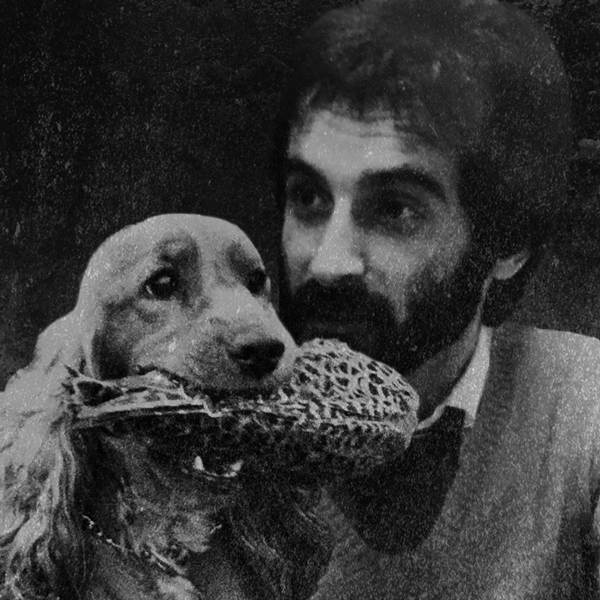 For the umpteenth time, a reinforcer is not a reward. When I hear “Force-Free” trainers say, “dogs like to work to earn rewards,”1 I suspect and fear they miss by a mile and a half the essence and function of reinforcers in learning theory (and so also of inhibitors).

I’m not splitting hairs. There is a crucial difference between “reinforcing a particular behavior” and “rewarding an individual.” I suspect ignorance hereof being as well the cause of the many incorrect statements on inhibitors2 from the “Radical Force-Free” camp (emphasis on radical).3

“Dogs like to work to earn rewards” reminds me somehow of the old days when I opposed the old school of military dog training. Not everything was hassle and squabble; we had our moments of pleasantries. After ten minutes of marching forth and back, the instructor would say, “And halt! Now, praise your dogs.” Yes, I went to that kind of dog training with my first dog. That was what we had by then.

I walked out in disgust and decided, there and then, my dog and I would train by ourselves and we would show them. We did.

I substituted praise with reinforcers, the real thing—not rewards,—including my ‘dygtig’4 and treats given at strategic points. I stopped using a leash and started using a lead. Leash jerks gave place to “No” immediately followed by “dygtig” when the dog, not me, corrected the mistake. That, my dog would undisputedly do because she visibly enjoyed being my “teammate.” I was a student of ethology and I knew about social canines, our domestic dog being one. Old Professor Lorenz’s words rang in my ears, “To understand an animal, first you have to become a partner,” and he knew better than anyone for he had done it with his goslings.

I signed up for the final “obedience” competition at the club, a hunting dog club run by real hunters, and we won with max points. That a young long-haired fellow in faded Levi’s and clogs had won created some agitation; and, as to add insult to injury, my dog was a little, only seven-months-old English Cocker Spaniel (a genuine one, not one of those oddballs we see in the US today), red and female, on top of that. Petrine was intelligent, beautiful, charming, a workaholic, and a sweety-pie—though I might be a tad biased.

Our performance generated some raised eyebrows and more humming than the establishment would have wished. At the prizes and punch social function, a few civilians asked me whispering whether I would help training their fidos (read companion dogs).

The following Saturday, we were training on a grass field across the road where I lived, now the local firemen’s station. That was 1982, the summer before my son Daniel was born; and that’s how dog training came into my life. I never planned it.

Two years later, in 1984, I wrote my first book, “Psychology Rather than Force,” with far too little experience but loads of good ideas including force-free, hands-free, reinforcement-based training with as few inhibitors as possible, and it even included a whistle (the precursor of the clicker).

I was positive dog training would change. It did, and the rest is history.

1 – This is an actual quote from a document published on the internet by a confessed “Force-Free” trainer.

Note that Skinner writes about reinforcers and rewards, “The strengthening effect is missed, by the way, when reinforcers are called rewards. People are rewarded, but behavior is reinforced. If, as you walk along the street, you look down and find some money, and if money is reinforcing, you will tend to look down again for some time, but we should not say that you were rewarded for looking down. As the history of the word shows, reward implies compensation, something that offsets a sacrifice or loss, if only the expenditure of effort. We give heroes medals, students degrees, and famous people prizes, but those rewards are not directly contingent on what they have done, and it is generally felt that the rewards would not be deserved if they had been worked for.” (Skinner, 1986, p. 569).

3 – “Radical Force-Free dog trainers” (also “radical positives”) is my denomination for those trainers adhering to the positive reinforcement-based or force-free movement, but having extreme views like claiming positive reinforcers are the only learning tool one needs, they never use aversive stimuli, one should never say “no,” everyone else but them is wrong, and other absurdities. Please do not confuse them with the non-radical positive or reinforcement-based dog trainers who are equally force-free but sensible, open-minded, prudent in their claims, and polite and considerate to otherwise thinkers.

4 – “Dygtig” is my preferred semi-conditioned sound reinforcer. It’s a Danish word meaning’ clever,’ ‘skilled.’ It has a good doggy sound.

Six-Bones, deaf and half-blind, learns scent discrimination in three days. Because he is deaf and half-blind, we need to use our imaginative and creative skills to devise the correct training procedures. Notice how the instructor and the handler create a conditioned positive reinforcer that they can use later when doing scent discrimination. Everything is done with the highest possible precision, patiently and thoroughly. The dog doesn’t need to see or hear to do scent detection. Its olfaction is as good as any other dog’s. All we need is to devise the correct way to communicate what we want and to teach it rightly.

In the end, the team passes the double-blind test, of course! 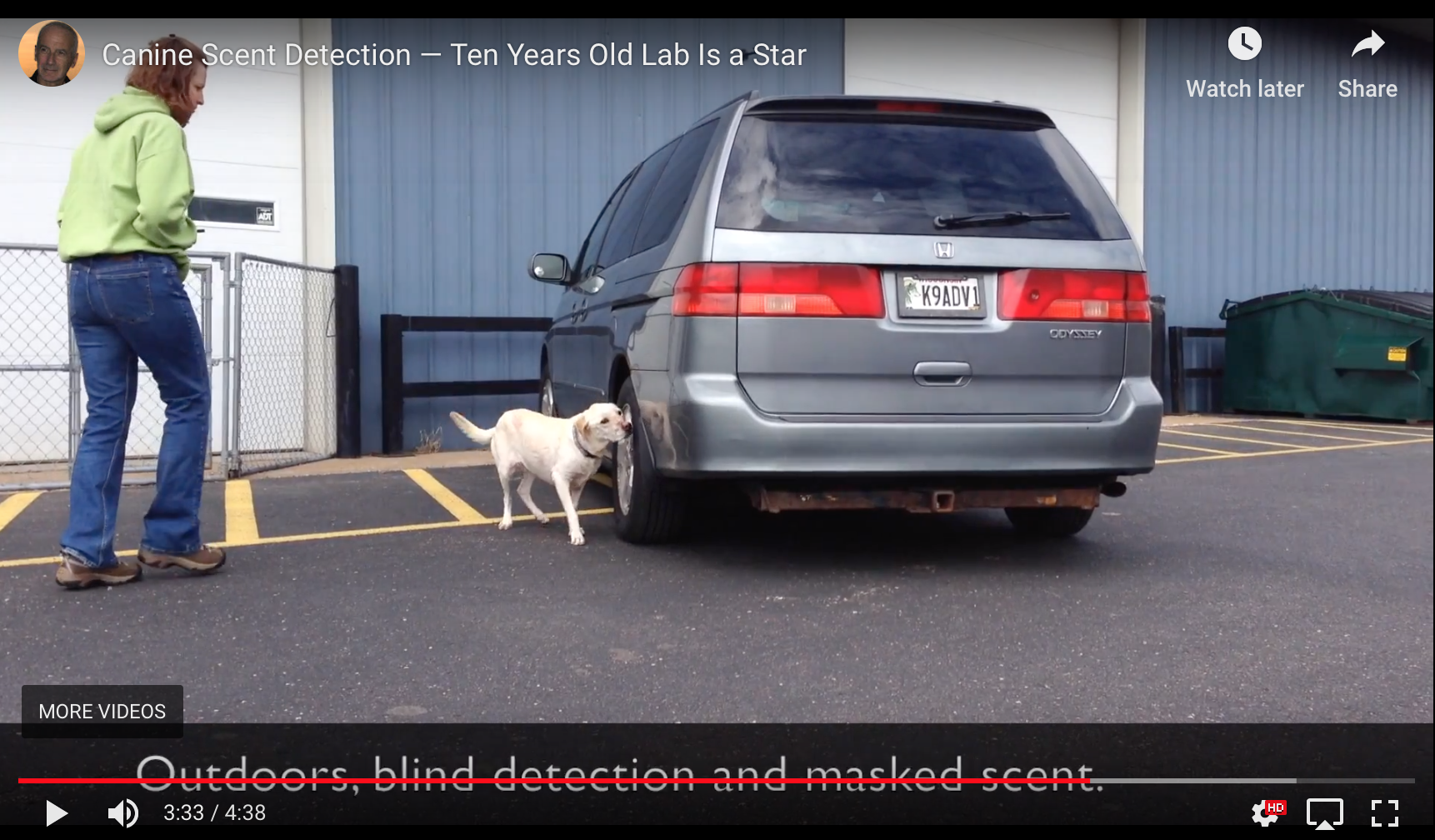 “Ten Years Old Lab Is a Star” shows what we can accomplish with a dog and an owner who have excellent communication. The age of the dog doesn’t matter, as long as the dog is stable, well-socialized and eager to learn. Its nose does not deteriorate. The team (human and canine) passed the double blind-tests in scent detection (gunpowder) both indoor and outdoor. The total efficient training time for Heidi and Cricket was eight hours spread over four days.

What you see in this video is professional work. To learn more, please go to our courses Canine Scent Detection and The 20 principles All Animal Trainers Must Know.

Our body language affects the effectiveness of our communication with our animals, as we have seen multiple times.
In this video, we look closer at the importance of our body language when dealing with a dog demonstrating insecurity, on the verge of impeding it of interacting with others.
We’ll need to use all our knowledge of ethology, interacting with the dog in ways, which are easy for it to understand, and, therefore, show appropriate responses.
Notice, that the differences between working with a dog with an average degree of self-confidence and an insecure dog are minor.
Often, we increase the level of insecurity of the dog precisely because we treat it as such. We help too much. The animal never gets a chance to solve the problems by itself and learn. Wrong behavior is still wrong behavior. What we must do is to increase the difficulty of what we ask the dog to do more gradually, in small steps.
At one time, we’ll have to “force” an error to teach the dog to cope with that as well, without showing strong emotional responses.
As always, be prepared to work on yourself. Everything you do matters. The way you do it, matters. The more you practice, the more subtle your signals will become. How you feel, and your level of self-confidence have a dramatic effect on the result. It’s all a question of attitude. Take your time.

To learn more, please go to our course Ethology and Behaviorism. 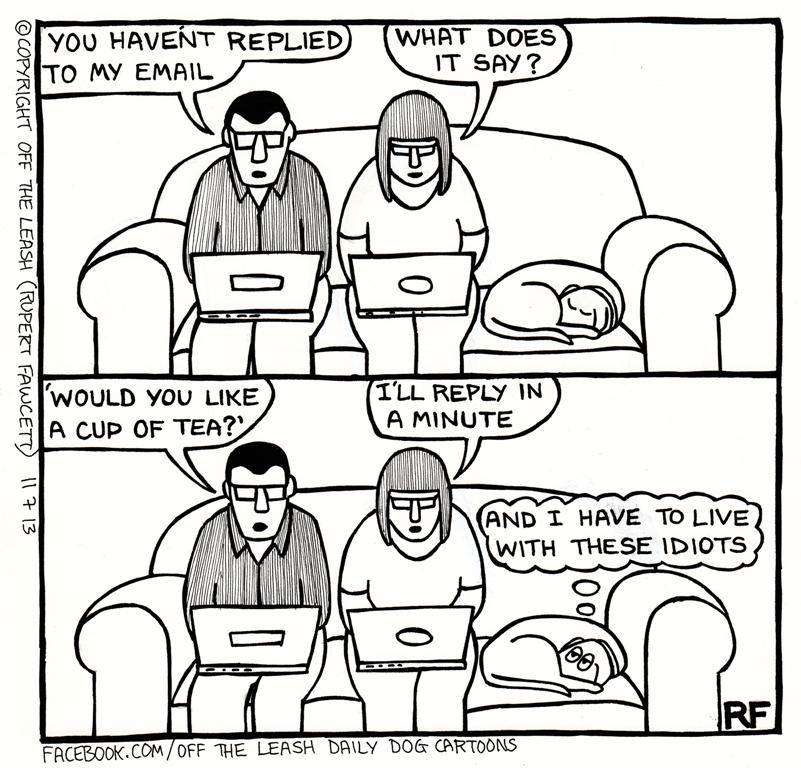 One of the most exciting aspects of the Guinea Pig camps, as far as I’m concerned, is how they evolved throughout the times.

Learning is an ongoing process and in spite of having held many GP camps, I still learn new fascinating details for every camp I have the privilege to conduct.

For example, for each camp we held, it became increasingly clear how important it is to build a good and trusting relationship with the little Guinea pig before we even consider teaching it any skills. If the piggy does not trust you, it won’t work. This should be obvious, but in these technocratic times we live, we tend to forget what is it like to be an animal (human animal in our case).

We also learned how efficient we can be when combining ethology with behaviorism, a daunting task many consider virtually impossible—but it is not.

Let me explain. Ethology studies the behavior of animals in their natural environment. Ethologists do not interfere with the animals, and as such there is no training theory to find in ethology. There is, however, much to find about interaction, communication and living together.

Combining ethology with behaviorism means to apply the knowledge we have about the natural behavior of the animals with which we work with the principles of behavior modification that we know will lead us to proven results under controlled conditions.

It is not as easy as it looks because as soon as we leave a proven track, we are on our own. Suddenly, we have no longer a recipe to follow. We need to improvise, to dig deeper in ourselves, to find the empathy that will connect us to the animal we train. The rules, we so painstakingly have memorized, do not seem to work any longer. This is an illusion, though, for the rules work all right—though only after a myriad of tiny, individual adjustments, so that they end up resembling exceptions. In that, Guinea pig camps excel. I’ve seen it time after time in the faces of the camp participants: a mixture of excitement and doubt, comparable to what I see in my diving students the first time they jump into the sea to discover that they can actually breathe under water.

And so here I am ready to start a new Guinea Pig camp, this time at the Wolf Park in Indiana. Wolves and Guinea pigs have nothing in common except that they both have much from which we can learn. We will commute between wolf enclosures and Guinea Pig training areas, listening to their stories and learning.

Featured image: Our animals have a lesson to teach us. In these technocratic times we live, we tend to forget what is it like to be an animal (human animal in our case).