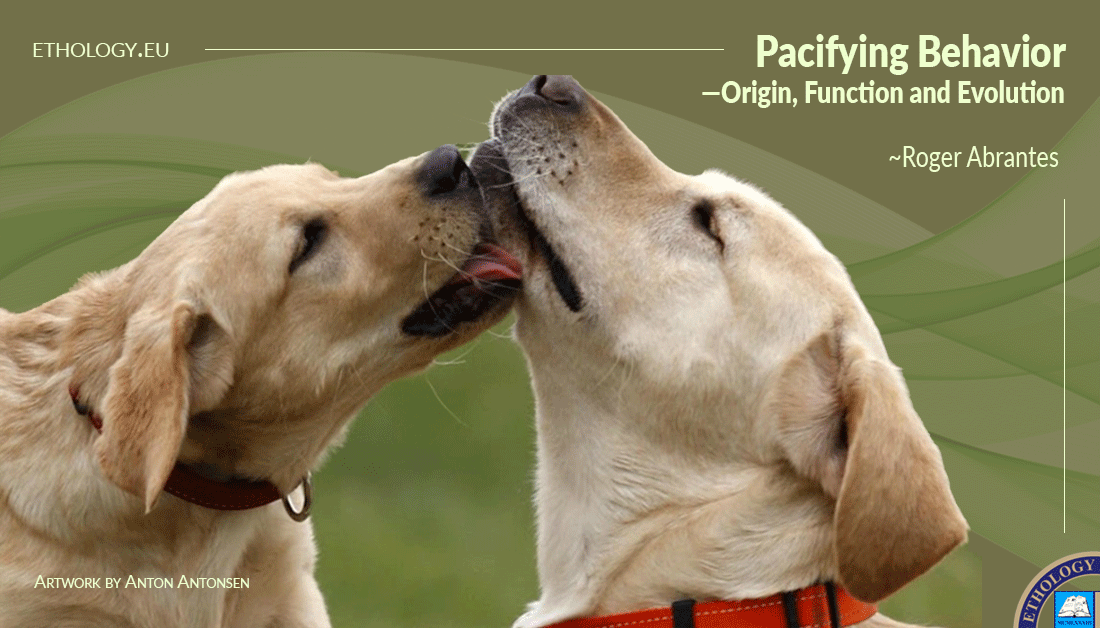 Pacifying behavior (Latin pacificare, from pax = peace and facere, facio = to make) is all behavior with the function of decreasing or suppressing an opponent’s aggressive or dominant behavior or restoring a state of tranquility. There are two ways of classifying pacifying behavior: (1) to include all behaviors with the function of diffusing social conflict, and (2) to restrict it to a particular range within the broader spectrum of conflict decreasing behavior (see diagram below). This author prefers the latter because the broad use of the term in the first option makes it synonymous with conflict decreasing behavior in general, without reference to any particular sub-class of this behavior.

Pacifying behavior is closely related to friendly behavior (including greeting behavior), insecure, submissive and fearful behavior. In general, the differences between these behavior displays are quantitatively small, but we can classify them separately and qualitatively according to their respective sub-functions. An animal pacifies another using a complex sequence of different behaviors as we can see in the diagram below. An animal very seldom shows a single behavior. Also, the same behavior may achieve different functions depending on its intensity, and the sum of all behaviors displayed at a given moment.

Pacifying behavior did not originate as a deliberate and well-thought strategy to manipulate an opponent. Initially, it was probably just a reflex. Like all phenotypes, it happened by chance and evolved thereafter.

Many species show pacifying displays in their behavior repertoire (photos by J. Frisch, AFP and Aleixa).

The origin of pacifying behavior—Animal A facing aggressive opponent B registers (sensory system) B’s behavior, processes it (neurological system) and responds with a behavior. The aggressive animal B registers this behavior (probably an infantile behavior); some behaviors tend to pacify it (probably eliciting parental behavior) while others do not. The pacified state of B benefits A and reinforces its behavior, i.e. it is likely it will repeat the same behavior in similar circumstances. Most importantly, animals that show appropriate pacifying behavior (such as A) survive conflicts and avoid injury more often than not and subsequently pass their genes onto the next generation.

Pacifying behavior also pacifies the pacifier, which is an important feature of this behavior. By displaying pacifying behavior, an insecure animal attempts to regain some security (homeostasis) by displaying a behavior it knows well and has previously served to reassure it.

Cat and dog use the pacifying behavior of their own species to communicate with one another successfully because of the common characteristics of the behavior (photo by HDANIMALSWALLPAPERS).

Even though pacifying behavior is more relevant and developed in social species, we also find pacifying displays in the behavior repertoire of less social species. Animals successfully use the pacifying behavior characteristic of their species with individuals belonging to other species (if possible) because of the common elements of pacifying behavior across species. It is not unusual to see our domestic animals, dogs, cats and horses interacting peacefully and exchanging pacifying signals. Dogs also show friendly, insecure, pacifying or submissive behavior to their owners and other humans with their species characteristic displays. Licking, nose poking, muzzle nudging, pawing and twisting are common behaviors that dogs offer us.

This diagram shows the placement of pacifying behavior in the spectrum of behavior in canids. The diagram does not include a complete list of behaviors. A conflict is any serious disagreement, a dispute over a resource, which may lead to one or both parts showing aggressive behavior. Resources are what an organism perceives as life necessities, e.g. food, mating partner or a patch of territory. What an animal perceives to be its resources depends on both the species and the individual; it is the result of evolutionary processes and the history of the individual.

The spectrum of pacifying behavior in canids (by R. Abrantes). The colored background illustrates and emphasizes that behavior is a continuum with fading thresholds between the various behaviors. The vertical lines are our artificial borders, a product of definition and convention.