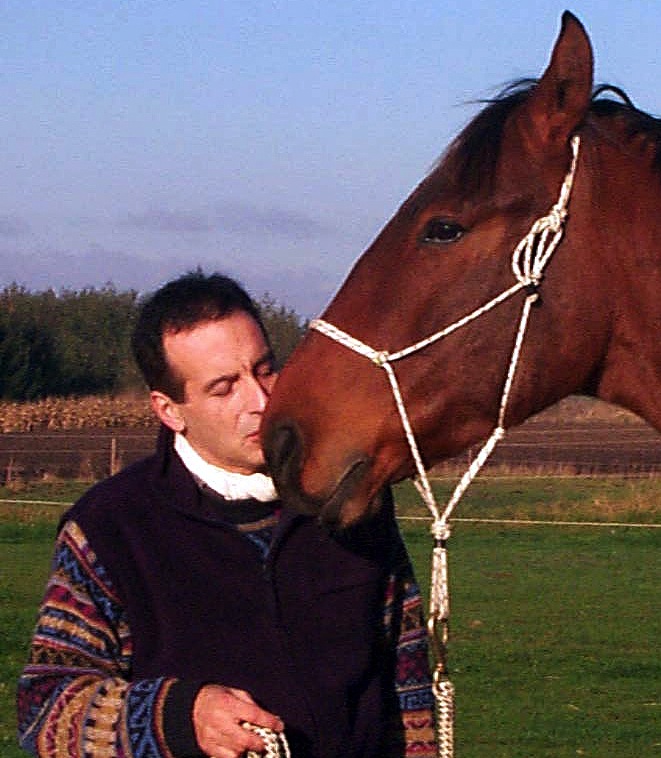 After a while, I began “leading the dance,” never used the reins, only changed my position on the saddle slightly. I looked left, and she turned left, I looked right, and she turned right, her ears for a moment turning back to me like asking, “Am I doing well?”

Years ago, my friends in the US asked me to go with them and see a horse they were considering buying for their daughter. A couple of hours drive through Illinois countryside, roads surrounded by never-ending cornfields, took us to a nice, clean and modern kind of an equestrian center where we found the horse and met the owner.

I liked the horse right away, a young, paint, quarter mare. The American quarter horse got its name from being particularly fast on distances up to a quarter-mile. Paint horses are white with spots of black, brown, or reddish. The American Paint is now a breed of its own. Most paints are levelheaded, versatile, and friendly horses. This mare was no exception. She had the looks of being approachable and curious, eager to learn. I don’t remember exactly how old she was, but she couldn’t have been more than three years old. She looked young to me to carry a rider on her back, and I remember asking the owner if they had trained her to it.

“Oh, yes, she is broken to ride, all right,” she answered.

That was not what I asked, but I reckoned I couldn’t get a better answer. What I wanted to know was whether the horse had gone through any particular groundwork to develop the right muscles and movements necessary to carry the extra weight of a rider. By the way, I don”t know about you, but I dislike immensely the term “horse breaking.” If you really break the horse, you shouldn’t even come close to a horse, and that’s my opinion. If you don’t, but instead train it stepwise, wisely and patiently, you should consider using another term altogether—and that’s again my opinion about that.

The young mare was beautiful, but then again, I might have been terribly biased, for my heart always beats a tad faster when I see a gentle, paint quarter (or a friendly English cocker spaniel). These are things of the heart that I can’t explain, and don’t feel I need to either.

The owner proceeded to give us a demonstration of the horse’s abilities under saddle. It was a sad showing. The mare trotted and cantered all right, and turned right and left, and stopped and continued, but she looked miserable.

After having finished, the owner invited my friends’ daughter to go for a ride, but she declined, showing the typical shyness of a teenager of her age.

“You go, Roger, take a ride and tell us what you think,” her mum said to me.

“Yes, uncle Roger, please do it,” my niece begged me with that “horsey” expression only teenagers who have been long around horses can give you. I couldn’t refuse her.

And so, I went for a ride, even though, in my opinion, she was a bit too young and untrained. We trotted and cantered right away and, then, we did figure eights and turns. The young mare was entirely different from earlier. She had regained her spirit, and if not wholly, then closer to the spirit of her ancestors, the proud horses roaming the plains of the new world.

“Wow,” my friends said almost in a choir, “that was impressing.”

“What did you do?” they asked me, “She behaved totally different with you! It was like a different horse altogether.” The owner pretended not to hear that.

“I did nothing,” I answered, and I was entirely honest. After mounting, I started having a long talk with the horse, a silent one, that is, for horses don’t understand English, and what I had to say was as much to her, the mare, as to myself.

“Ok, horsey, here we are the two of us. I’m sorry, we haven’t even been introduced properly,” I said, “Just do what you feel like doing. I’ll try to be as subtle as I possibly can.” And she ran, she trotted and cantered, and I did nothing besides trying not to be a burden, just syncing my movements with hers.

“Go for it, honey,” I thought, “run as much as you fancy, turn whenever you like. You lead, I’ll follow.” And she ran and turned, ears forward one moment, back the next, her mane flying in the wind. “Go, baby, go,” I thought, and she went faster and freer.

After a while, I began “leading the dance,” never used the reins, only changed, slightly, my position on the saddle. I looked left, and she turned left, I looked right, and she turned right, her ears for a moment turning back to me like asking, “Am I doing well?”

Sometimes, doing more does less, doing less does more, and doing nothing does right—and I suspect this is true more often than we reckon.

Featured image: To earn the trust of a horse is the first step toward a good relationship. It takes time to earn it and only one moment to lose it (photo from Ethology Institute files).