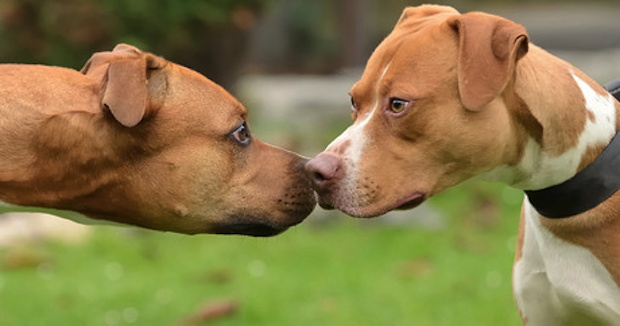 This dog (to the right) shows learned aggressive behavior. It may be impulsive-reactive, but it does not need to be (photo by onegreenplanet.org).

Let us also note that, “Aggression differs from what is commonly called assertiveness, although the terms are often used interchangeably among lay people (as in phrases such as ‘an aggressive salesperson’” in Quadri and Vidhate’s words. They also state, “Predatory or defensive behavior between members of different species may not be considered aggression in the same sense.” I would go a step further and insist we do not consider these behaviors as aggressive behavior in any sense.

A distinction in types of aggressive behaviors is between (1) pro-active (also controlled and instrumental) and (2) reactive-impulsive. The former is not an end in itself, only the means to achieve a goal. There are no strong emotions involved. On the contrary, its effects depend on deliberate and well-timed action. The latter has no goal in itself and is marked by intense emotions. In short, researchers of aggressive behavior in children have found it helpful to distinguish between reactive (impulsive) from proactive (instrumental) aggression.

Modern frustration-aggression theory claims that anger is a reaction to an aversive experience, including frustration. It emphasizes the importance of moral violation as justifying the expression of aggressive behavior.

The question is whether we also find these types of aggressive behavior in animals other than Homo sapiens sapiens. Being an evolutionary biologist and a good Darwinist, I am always highly suspicious of any statement claiming that a trait is exclusive to one single species. The odds of that happening are worse than winning the big lottery.

Do animals other than humans have morality, and will they fight for a cause? That is a difficult question because I cannot envisage any way of verifying it. In that sense, some would even call it a meaningless question.

Let us analyze the evidence we have. We know that some animals show empathy and altruism, widely recognized as conditions for morality. Shermer points out that humans and other social animals share the following characteristics: “[…] attachment and bonding, cooperation and mutual aid, sympathy and empathy, direct and indirect reciprocity, altruism and reciprocal altruism, conflict resolution and peacemaking, deception and deception detection, community concern and caring about what others think about you, and awareness of and response to the social rules of the group.”

However, we can account for all these characteristics in terms of evolutionary costs and benefits and using models based on evolutionarily stable strategies. We need not introduce a new term, morality, to explain that. Therefore: if humans show moral behavior, so do other species, albeit differently. What we might need to concede is that sometimes quantitative differences amount to qualitative differences. Hence, showing these traits to such a high degree, as is the case in humans, justifies us coining a new term, morality.

Suppose that is the case (and I’m only theorizing). Then, it makes sense to label some human behavior as moral and disregard the possibility of morality in other animals (unless remarkable discoveries enlighten us differently).

Thus, if it does not make sense to analyze non-human animals’ behavior in terms of morality, then it follows that we can neglect reactive-impulsive aggression caused by violation of moral rules in those animals.

However, we cannot dismiss the same behavior caused by loss of emotional control because non-human animals can also lose control over their emotions. The tricky part here is, as always, the term emotion, which is vague and, therefore, one that biologists prefer to avoid.

What is an emotion? According to Schacter, an emotion is “[…] a positive or negative experience that is associated with a particular pattern of physiological activity” caused by hormones, neurotransmitters, dopamine, noradrenaline, serotonin, and GABA. We find all these in some non-human animals; therefore, if we can accept the above definition of emotion, we must concede that if we can show emotional behavior, so can they.

The only way it makes sense when dog people speak of dogs being reactive (meaning they growl, snarl, attack, or bite someone) is that dogs display reactive-impulsive aggressive behavior. It is still, by all means, aggressive behavior, just one type that may or may not exist to some considerable degree in non-human animals, depending on whether I am right or wrong in my theorizing.

A dog displaying aggressive behavior can show it self-confidently (what we, ethologists, call dominant behavior) or insecurely (showing submissive behavior—not fearful). The former is not reactive-impulsive—it is instrumental and goal-oriented. The latter might be if the dog does not realize that a clear display of submissive behavior or flight would solve the problem. This kind of aggressive behavior may be: (1) the consequence of inadequate imprinting and socialization (the dog did not learn how to solve social conflicts), (2) the result of inadvertently reinforced behavior. Dog owners reinforce their dog’s reactive-impulsive aggressive behavior attempting to do what they call ‘calming down the dog.’ The dog growls, they say, “quiet ” (or similar), the dog looks at them, and they reinforce that with a treat and a “good job.” It doesn’t take many repetitions for the dog to learn that displaying aggressive behavior provides attention and food.

The term reactive does not belong to ethology, which classifies behavior by function. I don’t know how it came into dog training, but I suspect a psychologist introduced it, and dog people liked it because it sounded better to say, “My dog is reactive” than “My dog shows aggressive behavior.” Ironically, the term places the full responsibility for unwanted behavior on the owners—reactive-impulsive aggression is either the result of poor imprinting/socialization or inadequate training.

Heritability studies attempt to determine whether a trait passes from parent to offspring. Some genetic lines in many birds, dogs, fish, and mice seem to be more prone to aggression than others. Through selective breeding, we can create animals with a tendency to show more aggressive behavior.

Some aggressive behavior is evolutionarily advantageous, and some are not and might be an impediment to social cohesion. Maynard Smith states that it is not surprising for aggressiveness to have a strong genetic correlation, given the high likelihood of both potentially positive and negative selective discrimination throughout evolution.

Most researchers agree that we must consider the influence of genes, not in isolation, but as functioning in the whole genotype, as well as the effect of the environment. Thus, future research in the genetics of aggressive behavior may very well focus on epigenetic factors.

Doubtless, most behavior traits, except simple reflexes, contain a genetic plus an environmental component. No behavior will develop without the appropriate genetic blueprint, and no behavior (again except for a few simple patterns) will show in the absence of the correct environmental stimuli.

It is probable each organism filters and selects stimuli from a wide range in its habitat according to its genetics, thereby creating its uniqueness of experiences. As Bock and colleagues say, we make our own environment. I have no reason to suspect that the same does not happen with other animals.

Featured image: These two dogs are both equally self-confident (showing equal dominant behavior). Any aggressive behavior deriving from this situation will not be reactive-impulsive, but instrumental (photo from dog time.com).

Learn more in our course Agonistic Behavior. Agonistic Behavior is all forms of aggression, threat, fear, pacifying behavior, fight or flight, arising from confrontations between individuals of the same species. This course gives you the scientific definitions and facts.

Agonistic Behavior is a brand-new, for 2019 created course by leading ethologist Roger Abrantes. It is one of our most challenging courses, addressed to the dedicated student of behavioral sciences.

2 thoughts on “Aggressive Behavior—Inheritance and Environment”