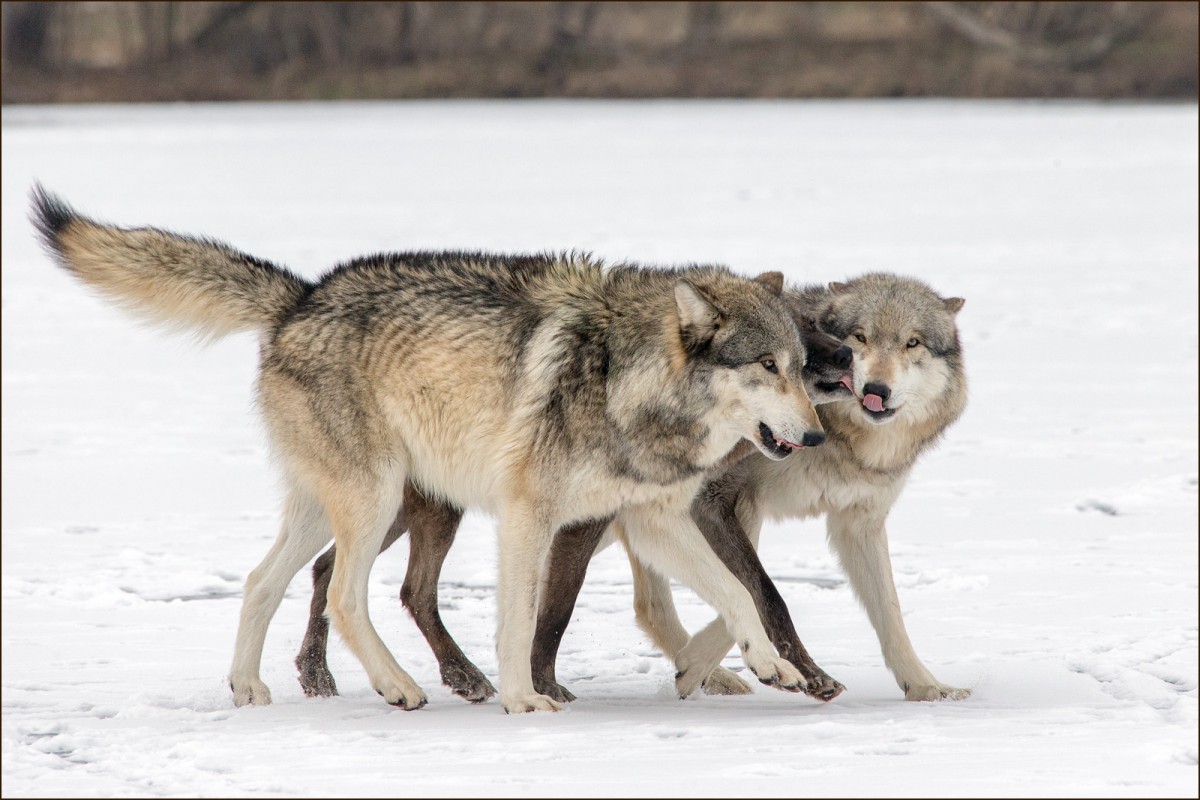 Our love-hate relationship with the wolf, the animal that shares 15 thousand years of common ancestry with man’s best friend, the dog, suggests a deep conflict, one that is well hidden and maybe closer to each of us than we dare to admit. Are we hiding a skeleton in the closet? Why do we take great pains to understand and be good to our dogs whilst we hunt the wolf mercilessly?

Natural selection favored the fittest and, as usual, species changed over the years. These changes can be so extensive that some species turn into new ones; others only into new subspecies. The Canis lupus perantiquus changed under selective pressure from humans and their environment and became Canis lupus familiaris. In a sense, we created this subspecies and all its variations to serve and protect us.

Some species react strongly to stimuli they have not experienced for thousands of years, the scent of a predator, for example. These alarming and life-saving key stimuli remain in the species’ gene pool, a kind of genetic memory. It is very unlikely that our fear of wolves stems from this kind of genetic memory; if we were that afraid of the wolf, we would never have gotten as close to it as we did. Perhaps we were afraid of the wolf in primitive times, but thousands of years of living in close proximity and cooperating would have changed that, as the least fearful members of both species would have benefited from the other. In those days, we can presume that the wolves that were least afraid of humans and capable of cooperating had better chances of survival and propagation (and ultimately turned into dogs); and conversely, the humans that were least afraid of wolves and were better at cooperating were more successful hunters, therefore survived and propagated (and ultimately turned into dog owners). Our fear of the wolf makes no sense from an evolutionary perspective, but perhaps it does from a psychological one. After all, we seem to fear what most resembles us—the enemy within!

Our fear and hatred of the wolf began long after the domestication, when humans took the first steps to distance themselves from nature, to enslave and exploit it—it happened when we invented agriculture. In the beginning, there was no war, only small-scale feuds provoked by the occasional domestic animal being taken by a wolf. The large-scale extermination of the wolf is not due to a single factor, but to an intermingled combination of factors that include mythology, religious zeal, environmental changes, economic incentives, and a deep psychological scar, as we shall see.

Mythology, such as Grimm’s fairytales and Aesop’s fables, evoke the wolf as evil, untrustworthy, conniving and cowardly, a greedy thief that will go to great lengths to devour a poor, little lamb, child or old person. Tales of Werewolves also exacerbated our fear and hatred of the wolf.

There is a clear association between the wolf and the wild, the wilderness and the untamed. As Burbank puts it, “The New World wilderness, where the Pilgrims found themselves, was a sinister adversary, home of tribal savages who practiced evil. The Puritans regarded the wilderness itself as a howling beast, a wolf inspired by the Devil. In their desolation, they sojourned and their journey reminded them that believers wandered in a world of sin, a spiritual wilderness replete with Godless enemies and insane beasts that wanted only to consume the righteous.” (Burbank 1990:80)

Farming and the keeping of domestic animals in enclosures combined with the decimation of the wolf’s natural prey, forced the wolf to get closer to human settlements and to feed upon the occasional livestock. Today, most wolves avoid livestock when they have enough wild prey, but the wolves of the 1800s faced extreme food shortages and preyed upon cattle and sheep. That wasn’t a problem for rich farmers. Even the smaller family farms could have survived the subsequent economic loss. Nevertheless, governments attempted to solve the supposed problem by creating bounties in return for the head of a wolf. Besides shooting them, wolf hunters used traps, poison, denning (excavating a den and killing the cubs) and biological warfare (infecting captive wolves with sarcoptic mange and releasing them into the wild)—and so wolfing became a lucrative business.

Mythology, religious zeal, and the economy go a long way towards explaining the hatred but don’t explain everything. One thing is to control competition (it happens all the time in nature). Another is to embark on radical extermination and, what’s more, find pleasure in the practice of torture (such as setting wolves on fire, skinning them alive, hanging them, etc.). Such barbarism suggests the real reason for our hatred is well hidden and maybe closer to our hearts than we care to believe or dare to face.

As with all organisms, human evolution happens quietly and slowly unless some sudden, drastic environmental change prompts the selection of unusual traits. The human brain was the sudden, single, dramatic cause that prompted a huge leap in the evolution of the species—and it was not an external cause, it came indeed from deep within us. The human brain enabled man to devise farming, then science and technology, and ultimately an anthropocentric religion. Farming enabled us to multiply far beyond the average rate up until that time and to colonize the entire world. Advancements in science and technology gave us the tools to subdue all life on the planet. Religious convictions provided us with motive and momentum beyond all rationality.

There is a high price to pay when evolution equals revolution. The (relatively) quick adoption of dualism and a mechanistic view of the world forced us to part with holism and animism, and left us with deep scars. In order to obey God, conquer the world and subdue all that crept upon our planet, we had to sever our connection with the natural, unruly, uncivilized world. To live up to the moral laws of Christianity, we had to go against our nature, denying who we were and where we came from. We had to cover our tracks. All that reminded us of our holistic past had to be oppressed, suppressed, forgotten. The wilderness in general and the wolf in particular reminded us of our true nature, the very same nature we despised. It became them and us. They were symbols of the unruly, the untamed and we, the purveyors of God’s wishes and civilized order. They symbolized what we were, not what we wanted to be. We had to subdue our own wild side, a legacy from our ancestors from many millions of years ago, which had proved highly efficient for survival, yet was despised and denied by the Holy Church. We were imprinted with religious zeal, which elicited the need to stifle the symbolic wild wolf inside each one of us; and we denied our origins, a strategy that was always only going to work on a short-term basis. A conflict of identity was inevitable; the werewolf represents perhaps our struggle to switch from an organic to a mechanistic worldview.

Through his fables, Aesop contributed to the creation of many myths that were detrimental to the wolf by depicting it with all the characteristics we despise most. Unknowingly, hence most ironically, in one uncharacteristic fable, he epitomizes our age-old conflict. In “The Dog and the Wolf,” the dog invites the starving wolf to live with him and his master, but when the wolf discovers that it involves being chained, the wolf replies, “Then good-bye to you Master Dog. Better starve free than be a fat slave.”

We became fat slaves by our own choice; and the wolf poignantly reminds us that there was a time when we had other options—herein the dog (wolf) lies buried*.

* “That’s where the dog lies buried,” means “that’s what lies behind.” This idiomatic expression exists in many languages, e.g. “da liegt der Hund begraben” (German), “siinä on koira haudattuna,” (Finish), “där är en hund begraven” (Swedish), but not in English. Most interestingly, the Swedish expression “att ana ugglor i mossen” (to suspect owls in the bog) meaning almost the same, comes from the Danish expression “der er ugler i mosen.” Originally, it wasn’t “ugler,” but “ulver” (wolves), which makes more sense since an owl in the bog is nothing special. Since the two words in some spoken Danish dialects are difficult to distinguish from one another, it was translated incorrectly into Swedish, and the expression re-introduced in Denmark with owls substituting wolves. The expression and its history was too good for me not to use it in the context of this article. I hope the native English speakers will regard it as an enrichment of the language, rather than a nuisance.

Featured image: We never fought the wolf, never the enemy, we fought ourselves—and the enemy within us (photo by Monty Sloan).